Gold on our first attempt !!

What can I say, words don’t seem enough to express not only my feelings but those of both the staff and our incredibly loyal customers. Having rushed home after the announcing of our award I was met with such an outpouring of pride and joy from almost everyone I met. To say that it was humbling was the understatement of the year.

I suppose I should start at the beginning, but where is the beginning I ask myself…..  realistically we started preparation for the most prestigious of all the horticultural shows about 3 months ago.

I gave up planning and growing specially for the shows, our facilities just aren’t anywhere near sophisticated enough for this. We have no cold stores, we don’t have hundreds of each plant to choose from, we do however have a great team of people and a love of plants that is unrivalled anywhere.

So with this in mind we set about gently growing a few plants that we thought might be suitable for our broadly woodland theme. After all where can you go wrong with Hostas and Ferns!!!! — Who were we kidding, the ferns we would have liked to use just wouldn’t grow and the Hostas grew too fast and were promptly eaten by something despite being covered with every slug deterrent we could find.

The week before the show panic rapidly set in… what were we going to put on our stand!!!! Never mind I thought to myself as I wandered around the garden looking for things to dig up, it had always helped in the past… there was the two magnificent Osmunda regalis by the pond that were promptly extracted, the Pieris in the field that had been there for ten years and looked stunning and our trusted Cornus alternifolia ‘Argentea’ that looked good, full of pretty white flowers.

Two days before departure, by now we were at fever pitch. The Pieris just didn’t look right, the Osmumdas were too big (but were going anyway just in case) and the cornus was just going over. – Disaster. What could we use as a focal point. Kev and Sand volunteered their Cornus controversa ‘Variegata’, the focal point of their garden – it was promptly dug up but alas had gone too far – what now!! Hazels mum came up with the answer, she had a Viburnum ‘Watanabe’ growing in her garden…. quick go get it!!! Hazel rushed over and dug this up too…. it was with a sense of horror that I told her it had too many flaws another year maybe but not this one. Finally Simon volunteered some of his prized Acers and one of them seemed to fit the bill… a lovely green leaved Japanese Maple loaned from his father (if we damaged it there would be big trouble). At last things seemed to be slotting into place. We loaded the lorry and van with far too many plants and set off three hours late on Friday afternoon.

Upon our arrival at Chelsea (about 10 p.m.) we unloaded and retired to our digs at about 2 a.m. We had arrived safely and even our huge Gunneras had travelled well. Perhaps things would be o.k. anyway. Our plants were good but almost totally green, never mind they would have to do. No time for last minute changes. (It was suggested that we pay a visit to Covent Garden but this seemed like cheating so we graciously declined).

Saturday morning came round far too quickly and construction began. Gradually the stand took shape. It seemed so small, how could we get everything in… Why didn’t we ask for a larger stand…. Too late now! 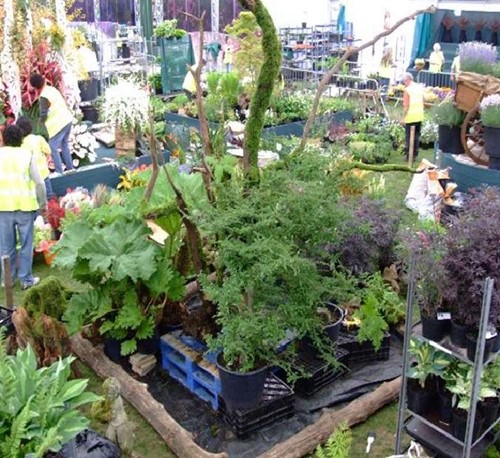 Construction began…. It’s amazing what pallets can be used for…. 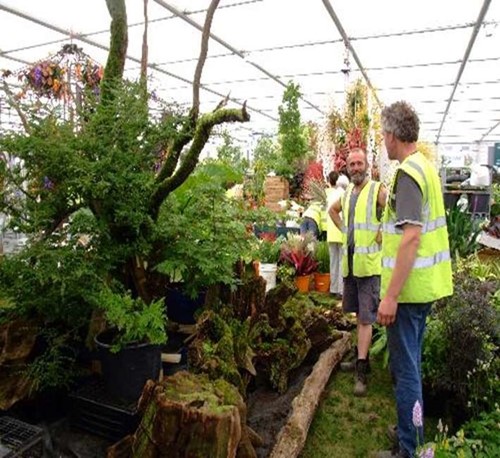 Discussing where to put what!!

By late Sunday all was finished, however the Acer didn’t look right and the Osmundas certainly were a no no. We somehow put together our creation and stood back to admire. 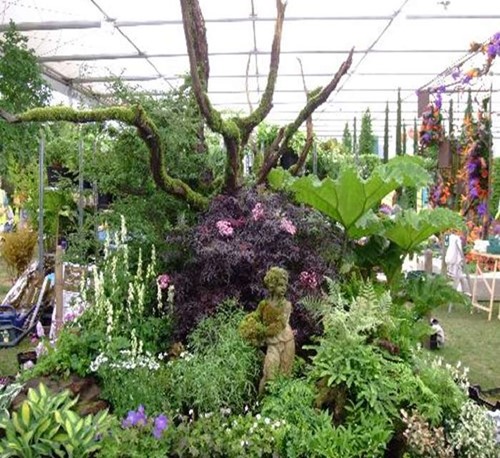 The finished stand…. or so we thought!!!

As we were stood there congratulating ourselves on a job well done,  Alan from Avon bulbs came round the corner for a critical look….. Good but not good enough for a Gold was his verdict, would you believe it, not enough flower on our centre piece the Sambucus ‘Black Lace’. We were gutted, we had twelve hours left and no-one had anything we could use… what could we do. Only one answer a mad rush back to the Nursery a ten hour and 400 mile round trip. So Stu and Hazel volunteered to do the task. Driving through the night they brought back anything that had a flower on it from the garden, the sales area and the nursery in general, not to mention things from mums garden – all by torchlight. These were cunningly worked in and the stand was completed. The rest as they say is history. 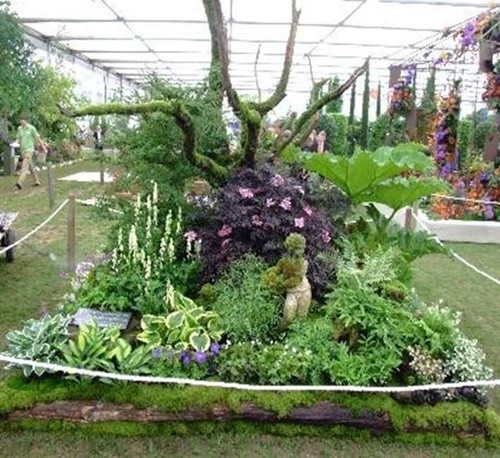 The display after the flowers (and one or two Hostas) were positioned. Subtle yet essential! 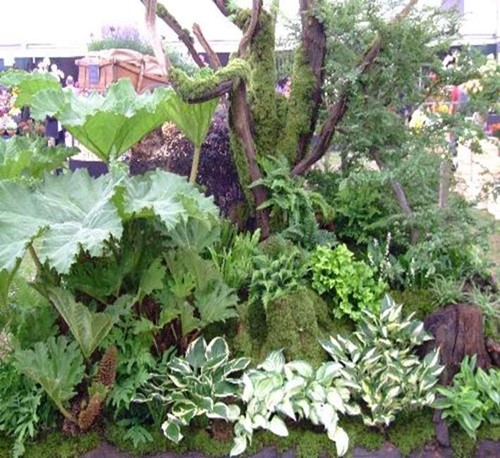 The other side of the display

I would like to thank everyone for their tremendous help and support both before and after the event. As I said earlier it is such an honour to be awarded this medal and we are all extremely proud.

It is great to be representing Wales in such an event.