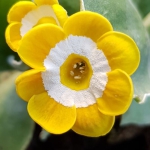 These are certainly plants that are collected by plant enthusiasts. A bit Marmite-like, you either love them or you hate them! Flamboyant flowers are borne during April and May and are a sight to behold. It is understandable that their brightly coloured blooms are not to everyone’s taste. Many are multicoloured with distinct bands giving them an almost painted look. This is their real appeal. Some varieties, especially in the ’show’ division have greyish mealy foliage that set off the colours amazingly.  Add doubles and Stripes and  now you are getting the picture.

Their history is long and complicated. The modern ‘Auriculas’ or ‘Bears Ears’ are almost certainly a 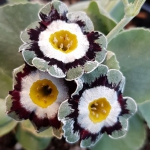 hybrid between P. auricula and P. hirsute. They appear to have been grown on the continent way back in the sixteenth century. By the early 1600’s there were many varieties on the plant circuit. Tradition has it that the first plants were introduced into Great Britain by Flemish weavers fleeing from religious persecution. This may or may not be true but it adds to a good story. Over the next few hundred years they gained in popularity. Several societies were formed. During the wars many varieties were lost as food production took priority but as we journey well into the 21st century they are more popular than ever.

They are subdivided into four main groups – Show, Alpine, Border and Other. I will leave this where it is for now. Those who would like further details can look at the following sites for an in depth analysis.

There is an interesting blog article here

Here is a classification page from the Auricula and Primula Society. Anyway back to our modest collection of about 100 varieties. They can be a little tricky to grow outside; needing well drained sites that have good light yet are shaded from the worst of the midday summer sun. Border auriculas are the most reliable for general garden planting. The fancy ones really need winter protection. They are hardy enough but the farinose (The grey leaved) ones really hate to be continually wet.

We grow ours in a cold poly-tunnel and have no problems whatsoever.

As far as getting new plants there are several options. Seed is easy, and very rewarding. You are never sure what you are going to get and it is the best way to produce new varieties. You never know that seedling of yours could be the next best seller!

To propagate named forms they have to be grown from division or cuttings. We do both during March 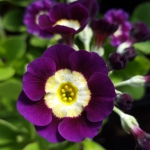 but they can be done at almost any time up until July(ish). Cuttings may seem a bit brutal as you savagely swing your knife and decapitate your prize plant. Amazingly they respond well – producing many shoots that can then be detached for more plants the following year. You sometimes have to be bold in this game. Before you know it you will be giving plants away or swapping with fellow enthusiasts.

Why not try something different

They do look well in terracotta containers. Somehow they were just made for each other. If you become a real enthusiast why not build yourself an Auricula Theatre. This is the traditional way to display them and a good stand will take your breath away. Anyway, just have a  go, they won’t disappoint you. 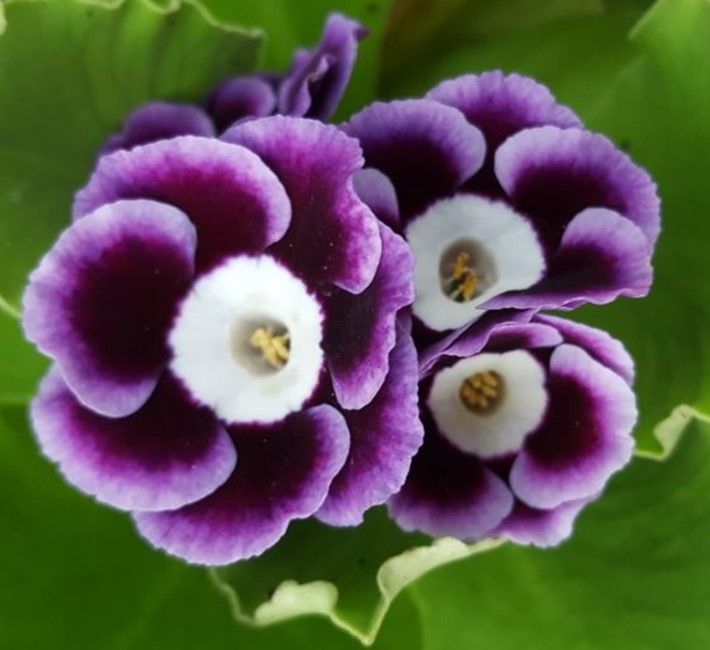