Rhododendrons and Azaleas are the epitome of spring, and when in full bloom they really do take centre stage, with their showy, exuberant displays of colour, their form and habit, they really stand out in the spring landscape.  Whether it is a single specimen or a grouping, they really are a remarkable sight. 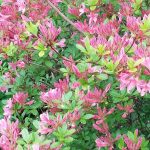 Native to Asia, Europe and North America and can be either evergreen or deciduous.  All the evergreen species originated from Asia originally.  Both Rhododendrons and Azaleas have been extensively hybridised for hundreds of years now, resulting in thousands of named and unnamed hybrids.  Due to this, their characteristics do not always clearly identify them as either Azalea or Rhododendron.

Rhododendrons and Azaleas are both part of the same family, genus Rhododendron.  Generally, Azaleas tend to be small to medium sized shrubs with many stems, whereas the Rhododendron are larger plants with fewer but thicker stems.  Rhododendrons are in effect Azaleas but on a grander scale, bigger flowers and foliage.  According to botanists, there are not enough botanical differences between the two to classify them as two separate species 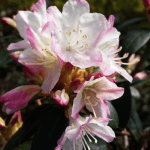 The following characteristics generally help us to tell the difference…..but not always:

Flower Shape – Azaleas have tubular or funnel-shaped flowers and one flower per stem but as they have many more stems, they appear to be covered in flowers.  Rhododendron flowers are bell-shaped and grow in clusters at the end of each branch.

Flowering Time – While Azaleas tend to flower at the beginning of April, Rhododendrons are a little bit later in the spring. 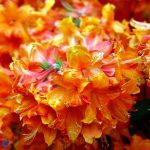 Flower Colour – The colour range of Azaleas is quite broad, and come in many shades of white, cream, pink, red, lavender, purple, orange and yellow.  Rhododendrons tend to be white, orchid pink, purple, red and occasionally yellow.

Stamens – Azaleas have five stamens, whereas Rhododendrons have ten

Foliage – Azalea foliage tends to be pointed, thin, small and pliable, whilst the Rhododendron bears large paddle shaped thick leaves.  The underside of the leaves are sometimes scaly and may have small dots.

We have an extensive range of Azaleas and Rhododendrons at the nursery, in a wide variety of colours, heights and habits.  We have just had some lovely varieties in to extend our range further.  I’m sure there will be one or two that will catch your eye! 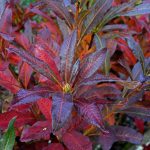 Best planted in early autumn or in the spring, and in a moist but well drained loam or sandy soil. Azaleas and Rhododendrons, like Hydrangeas and Camellias like an acid soil, so if your soil pH is above 7 then it is easier to grow in a container using a good ericaceous compost.  Once planted, either in a container or in the ground in acid soil, water well and mulch.  Space the plants 2-6 feet apart, depending on their expected size at maturity.

Start by digging a hole as deep as the root ball and twice as wide.  The top roots of the plant need to be at soil level or just below.  If planted too deep, you run the risk of their roots rotting.  Once in place, half fill the hole with soil and water it well, this will settle the soil.  You can then top up the remainder of the hole with soil.

Azaleas and Rhododendrons do not normally need an awful lot of care.  Dead head after flowering to prevent self-seeding.  Plenty of water during dry weather, especially if it is in a container.  A yearly mulch with ericaceous organic matter.  Try to avoid piling the mulch around the trunk as it will keep the trunk damp and encourage rot.  It only needs a couple of inches to protect any shallow roots and maintain moisture.  Fertilise sparingly in the early spring, too much may burn the plants.

Pruning is only really required to maintain shape or restrict excessive growth.  Hard pruning can kill Azaleas so if you really need to prune back hard then just cut back one or two branches first to see if any new growth appears in spring.  It is best to prune in winter when dormant.

They can be grown from seed in either a warm frame or greenhouse between February and April.  They require four main things, light, warmth, fertiliser and moisture.  Drop seeds onto the surface of a peat/perlite mix, and place the tray or container in a bag to keep the moisture in.  Most varieties will germinate in 10 days to 3 weeks’ time.  After another 4-8 weeks, the seedlings will have grown some leaves.  At this point, they can be transplanted into bigger pots; they will need feeding with a weak fertiliser.  When the weather permits (once the frosts have passed), they can be placed outdoors but will need protection from wind and bright sunlight. Be aware that when growing from seed that they may well be hybridised with other nearby Rhododendrons and Azaleas so may not be true to form.

Alternatively, to ensure that you will get the same characteristics and flower colour then it is best to grow from cuttings.  Ensure the plant is sufficiently hydrated before taking cuttings from it. Avoid taking cuttings near the top or branches that have turned brown.  Snip off about 7.5 cm (3”) cuttings of upright side shoots in September/October.  Leave 4 to 6 leaves near the tip of your cutting, and remove all branches from the bottom 1-2 inches.  Next, cut two 1” slivers near the bottom of the cutting, ideally on opposite sides to encourage root growth.  They only need to be deep enough to expose the inner wood.  Then dip the bottom into a hormone rooting powder suitable for hardwoods and then placing in a substrate made up of equal parts peat moss and perlite.  Water the cuttings then place a bag over the pot and secure with a band so that moisture cannot escape.  Place the pot in good light but avoid direct sunlight and within 2-4 months they should have developed roots, at this point they can be transplanted into a pot or outdoor location.

The most common pests affecting these plants are Vine Weevil, Aphids and Lacebugs.  The best defence against these problems are to consider plant location, good aertation, good soil, careful mulching and good watering habits.

Leafy gall can be a problem for Rhododendrons and Azaleas, the best method for controlling this is to hand pick the infected leaves.  Powdery mildew can also cause a problem, by keeping the plant well aerated and by watering from above you can ensure that any spores get washed off before it becomes an issue. 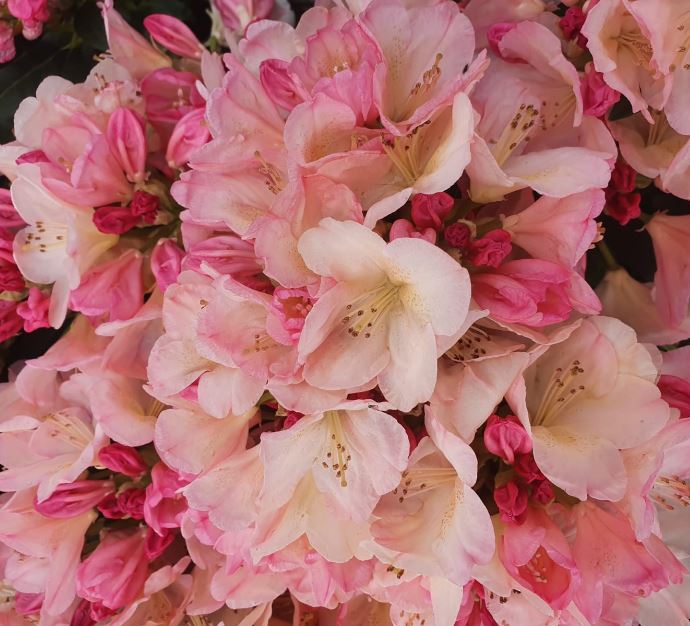