A Guide To Growing Potatoes In Your Garden

A Guide to Growing Potatoes

We love a potato in this country, we tend to eat them any time of the day. Whether it’s boiled, roasted or mashed with your Sunday roast or chipped with fish for your tea, or even sautéed with your Full Breakfast.  They are a versatile vegetable and one of our staple foods.  As the cost of potatoes have risen so has the popularity of growing your own.  However there is more to it than just cost.  Some of the best quality varieties do not travel well, so they are not always available in shops and supermarkets.  Also, for the majority of early new potatoes the flavor and texture is at its best straight from the garden!

In order to have a year round crop then you will need to grow three different groups: early, second early  and maincrop.  The earlier the variety though, growth rate is faster but the yield is lower.  If you are limited on space, it is maybe worth leaving out the maincrop and just growing the earlies, as these ones are harvested when potatoes are at their most expensive. 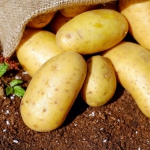 As I touched upon a moment ago, in order to supply a family of four throughout Winter and Spring you would need quite a large area of land or an allotment.  As an idea of how much seed potato is needed, we have a guide of 2kg of earlies, 5kg of second earlies and 2.5kg of maincrop per person, and approximately  5 square metres of land per person.  So for a family of four 20 Square metres of land is required!

Where to plant – Site and Soil

Potatoes can be grown in a simple rotation system.  They are generally grown with root vegetables.  Sow the potatoes to precede the cabbage family as they particularly appreciate the clean, well turned condition left by the potatoes.  Potatoes are a good choice as a first crop on old pasture or grassland being changed into cultivation land.  As a precaution to disease, they shouldn’t be grown in the same soil two years in succession. And avoid growing tomatoes and other nightshade members in rotation with potatoes, as they are of the same family and can transmit disease.

Ideally, the site should be open and not in the shade of walls, buildings or trees.  Potatoes are not too bothered about soil type, but if you live in a heavy clay area then you need to choose your varieties carefully, as the early varieties prefer light soil.

The seed potatoes from which potatoes are grown are dormant tubers known as sets.  They are obtained from vigorous plants before they are fully matured and then exposed to the air for a few days. Most people buy tubers every year but it is also safe to grow from tubers of your own crop every other year.  If you are using your own sets ensure they are healthy as it is impossible to get a good crop from poor or diseased sets.

Order your sets in time to begin sprouting towards the end of winter for maincrop and earlier for early varieties.

Place your tubers in trays or empty egg boxes in a light, well ventilated and frost proof place .  This enables growth to begin before planting out in the spring.  Locate the end of the tuber where the eyes or dormant buds are crowded together – this is the top.  Stand them upright. Cover in newspaper to protect if there is any risk of frost . This process takes about 6 weeks and results in an earlier and heavier crop. So you want to be planting when the sprouts on the sets are about 3cm.  Large sets can be cut into pieces, each piece having at least two strong sprouts.  Dust the cut faces with plaster of paris or flowers of sulphate so as not to lose moisture, or alternatively place the exposed surfaces together and cover with a damp cloth until planting

The ground should be prepared in early winter.  Dig well and treat with a moderate amount of rotted manure or compost.  Do not use Lime, as this will encourage attacks of scab, and too much nitrogen will produce growth of the stem, at the expense of the tubers.  If organic matter is not available then a fertilizer can be added about 2 weeks before planting

Potato rows should run north to south so that the plants can receive the maximum amount of sunshine.  The rows should be 50cms apart for the earlies and 75cms apart for the larger maincrop plants.  Dig V shaped furrows from 8cm deep for heavy soil and up to 15cm deep for a lighter soil type.  Put some manure down where the sets are going to go and cover with 2-3 cms of soil to avoid the sets coming into direct contact with the manure.

The earlies should go into sheltered ground at the end of winter, with the second earlies and maincrop following at monthly intervals.  Once the sprouts are about 3cm, rub off all except two or three sprouts with your thumb.  Get rid of the one at the extreme top and then any that are still white, and the then the least promising looking of the surplus.

Healthy shoots are the purplish ones.

The sprouting sets can be placed upright in the drills 30cm apart for the earlies and 40cm apart for the maincrop.  Cover each with soil by hand to protect the sprouts from damage when refilling the furrows.  Rake the soil level along each row.

Caring for your potatoes

Potatoes need to be protected from frost, especially for the earlies, due to the time they are planted.  Once the shoots start to appear above the surface, they are prone to ground and wind frost which will burn them black and setback your harvest by weeks.  When the shoots are just a couple of centimetres protect them by drawing up a little earth to protect them.  Once the shoots are 7.5-10 cms they should be covered with straw, leafy branches or bracken.

When the shoots are about 20 cm then you can start earthing up.  Earthing up is quite important for several reasons: The haulms of the potato plants are jointed and the tubers grow from underground joints, earthing up creates more joints and results in heavier crops.  More importantly though the earthing up process keeps the tubers well buried and not exposed to the light.  Exposure to light will turn the tubers green, and green tubers contain a poisonous substance and are dangerous to eat. 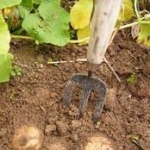 Loosen up the soil between the rows several times through the growing period, being careful not to damage the plants.  Potato plants are prone to a fungal disease called blight, you can help protect against it by spraying with Bordeaux or Burgundy Mixture.  It will not however cure it!  Ideally spray your maincrop once in midsummer and again in late summer.

Any flowers that appear during growth should be removed.  The tubers will mature when the haulms turn yellow and the growth starts to slow.  This should happen with all plants around the same time.  If isolated plants show these signs then you should suspect disease.  It is advisable to cut the tops down and burn them, leave the tubers to mature until they are of a usable size to harvest

Harvesting and storing your Crop

Early or New potatoes are eaten in their immature form, they are smaller than maincrop and no bigger than an egg.  Lift one or two sets to see if they are ready, alternatively just lift a few tubers by hand and cover the rest back up to mature more.  Lots of people just dig up the potatoes that they need daily, as they lose flavor quite quickly once they leave the ground.

A potato fork that has flat blunt tines is a great asset for lifting the crop without damaging the tubers.  Ensure that no pieces of tubers or potatoes are left in the ground.  As this will destroy the principle of not growing potatoes in the same site for two years running.

The earlies can go straight into the kitchen to be used when needed, however the maincrop will need to be stored.  After lifting let the potatoes dry off on the ground for an hour or two before being taken in.  Clean off the soil by hand.  Discard any that are damaged or diseased.  Whilst you are handling the potatoes you might as well pick out any seed potatoes that you may require.  Store your potatoes in a dark, frost and draught free room.  Boxes and bags will do for storage, but put straw under the bags, and check frequently for vermin.  It is best to check on your stored potatoes once a month and discard any rotten ones and rub off sprouts.

If you are growing potatoes from seed for a Christmas Harvest then you will need to get them planted in August as they take approximately 12 weeks to be ready.  The method of growing is exactly the same as with the summer potatoes.  If you are growing outdoors then it is necessary to protect them from the frosts.  For light, free draining soils by adding extra compost to your rows and a deep mulch of straw your tubers will have adequate protection until they are ready to be lifted.  However, if your soil is cold, wet and heavy then it is better to lift the tubers around the end of October and rebury them in coarse sand or soil in a frost free place (for example, a shed) until you need them.

Potatoes can suffer from many pests and diseases, but the ones listed here are the most likely to occur

Eelworm – Eelworm larvae attack the tubers, causing the plants growth to stunt, wilt easily and turn yellow or pale green and die easily.  If eelworms are present there will be tiny dots on the roots.  Infected plants should be lifted and destroyed and the soil used for grassland for 8 years.

Wireworm – Wireworms bore into the potatoes, they are especially a problem in wet summers.  If wireworms might be a problem, grow early varieties as these are rarely attacked or lift maincrops as soon as the tubers mature.

Slugs – Again slug damage is more likely during wet summers and/or in heavy wet soils.  Try to keep the garden clear of hiding places, and limiting the use of manure.  Use slug baits to keep them away from your potatoes.

Greenfly – Greenfly are dangerous to potatoes because they spread virus diseases.  Destroy by spraying.

Potato Blight – The most common disease – A fungus disease that causes dark brown/black patches on the leaves and stems.  Infected tubers have sunken areas on the outside with brown flesh underneath.  It can spread rapidly.  Blighted foliage should be cut and burned.  If caught in its early stages, the tubers are still edible but allow 10-12 days before digging them up.  Do not store blighted potatoes.

Potato Wart Disease –  A fungal disease which causes large irregular growths on the potato which look like cauliflowers. Infected plants must be burned and avoid planting in that area for ten years.

Scab Disease – Common scab is a superficial disease affecting the skin and making peeling awkward. It can usually be prevented by lining the drills at planting time with a small amount of lawn mowing.  Powdery or corky scab is more serious.  It causes round swellings on the skin, which rupture and release a brown powdery substance.  The soil can be contaminated for several years, so avoid growing potatoes on that site.

Black Leg – a bacterial disease causing the stem to blacken at soil level, the leaves turn yellow, the haulm withers and the tubers rot.  Dig up infected plants and destroy 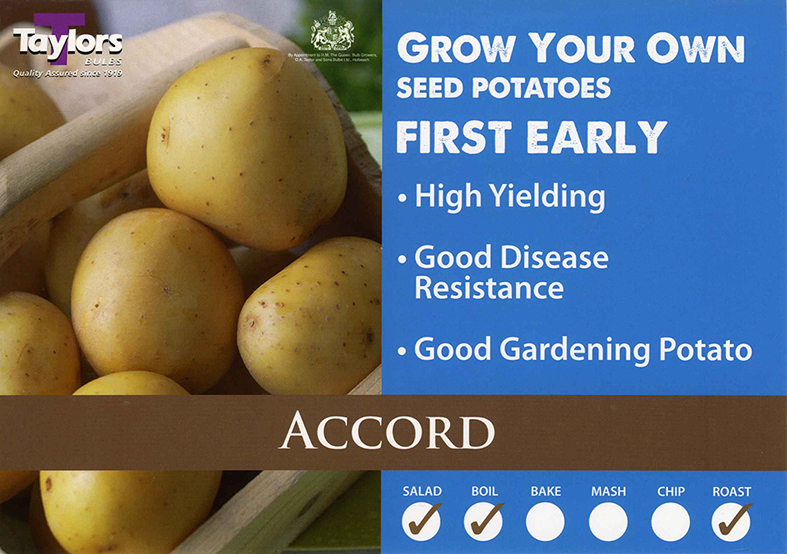